The Opioid Crisis: How Students and Professors Are Making a Difference

The question is no longer if you know someone with an opioid problem, but how many people you know.

Overdoses from opioids reach every state, every ethnicity, and every socioeconomic level. The Centers for Disease Control and Prevention (CDC) uses the term “epidemic;” int he latest available data, 66 percent of all overdose deaths were from opioids. “In New Jersey, it is something like six [fatalities] a day, which is higher than it has ever been,” says Jill M. Williams, MD ’93, professor of psychiatry and director, division of addiction psychiatry.

Dr. Williams was already considering what she could do when Rutgers Robert Wood Johnson Medical School students approached her. They wanted to learn how to help tackle this crisis. In 2018, the school established a full-year elective class, which meets 12 times per year. Even as a new offering, it instantly attracted a quarter of the students.

One topic Dr. Williams discusses is “how to be a safe prescriber,” she says. “These are students, so they have not yet gone into practice. We are talking about how to shape them so they understand safe prescribing.” Topics covered include New Jersey’s opioid problem, overdose prevention, use of naloxone, treatment and harm reduction, alternative treatments for acute pain, and alternative treatments for chronic pain.

Students behind the initiative recall how the opioid crisis was constantly garnering attention before they began their studies. Once enrolled as medical students, they felt obliged to learn more. Even though the epidemic has been years in the making, teaching how to combat it is relatively new. Yet Robert Wood Johnson Medical School students and faculty moved quickly and are doing a lot to educate future physicians to examine the epidemic from different perspectives.

“I saw that this school had become a very good home to not only learn more about the opioid epidemic as a medical student but to also find a way to engage,” says Kitae Chang, at the time a second-year student and one of those who approached Dr. Williams.

Chang; his roommate, Stephen Marabondo; and classmates Kelsea Smith, Daniel Haddad, and Lefan He wanted to heighten awareness about the epidemic and learn how to recognize the signs of an overdose and administer Narcan, a brand name of naloxone, the life-saving drug that stops the effects of an overdose. This may not have been the first problem the students thought they would encounter, but it is undeniably a priority. 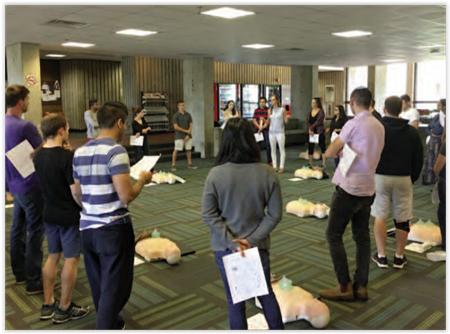 “For a while in medicine, we were taught that obesity would be our biggest problem,” Chang recalls. “Although obesity is readily visible, for someone suffering from opioids it can be anybody; it could be somebody who attends medical school but in private is suffering from these demons. It is going to be a tricky problem, and it may require solutions that come from grass roots.” Although the overriding and overwhelming problem is the same everywhere, different states adopt a variety of legislation, resulting in diverse approaches toward access to naloxone.

At one time, it was not actually easy to obtain,” Chang says of naloxone. “It is a very local problem for our state. As it turned out, [then] Governor Christie signed the OD Prevention Act that permitted pharmacies to sell it. The pharmacy had to obtain a standing order, a contract signed between the physician and pharmacy.”

Students again took the initiative. In addition to creating awareness, they are now calling all the pharmacies in Middlesex County to ensure they have the necessary paperwork so naloxone is available to the public without a prescription. These students also want to make the opioid training a permanent part of the curriculum.

“More people will become vulnerable,” Chang says. “As future physicians, we may be complicit because we are part of the access to opioids. That adds to the impetus for me to want to understand and fix it.”

“We are also currently working on a research study to understand the effectiveness of providing the naloxone training and opioid elective on first-year medical students’ attitudes and knowledge regarding the current opioid epidemic,” Marabondo adds.

As with any epidemic, it did not suddenly appear as a scourge, and Dr. Williams puts it in historical context. Opioid addictions grew out of a well-intentioned, albeit unsound, mind-set of pain management guiding physicians in the 1990s. “Even if you wanted to send your patients to a pain clinic for comprehensive pain management, insurance might not pay for it,” Dr. Williams says. “Insurance only pays for the pain pills, but not the management. And we are still dealing with that today in terms of HMOs [Health Maintenance Organizations] and managed medicine.”

Ultimately, Dr. Williams wants to see a holistic approach toward pain and greater access to treatment for substance use disorders. This epidemic, as we are constantly reminded, knows no boundaries. “It has affected everyone, including people in the suburbs, which is very unusual,” Dr. Williams says. “It really has reached everyone in our society, not just the disenfranchised. And the truth is, the rates are still increasing.” As with so many programs at Robert Wood Johnson Medical School, this initiative reaches across disciplines. 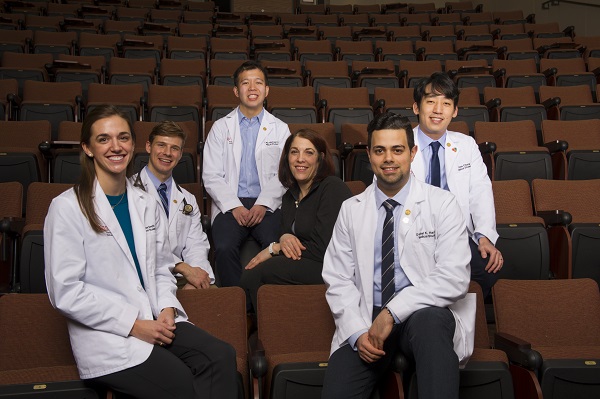 Nina A. Cooperman, PsyD, associate professor of psychiatry, has been working with various coalitions to provide people with training and the naloxone kit. The Opioid Overdose Prevention Network trained close to 1,000 people in a three month period.

Dr. Cooperman, principal investigator for a grant from the New Jersey Division of Mental Health and Addiction Services, strives to bring the naloxone training and kits to as many as people as possible. “We are just trying to decrease the harm until we can get someone to go into treatment and recover,” says Dr. Cooperman, who with Dr. Williams is the elective’s class coordinator.

“We put out the word that we are doing this, and we are now getting requests to do trainings from all different com- munity organizations,” she says. “We started out with sub- stance abuse treatment programs.” Since then, they have talked with police, school nurses, and librarians. If librarians seem a curious group to target, Dr. Cooperman explains that people are overdosing in library bathrooms. “Anybody can get trained, and we train them on how to recognize an overdose, and rescue breathing, and administering naloxone. And we provide them with a nalox- one kit, with instructions on calling 911 to make sure the per- son gets to the emergency room.”

As news stories constantly remind us, no one is immune. Whether it’s from prescribed painkillers or heroin, the insidi- ousness is in how final the effect can be. Everyone hears about the death of Philip Seymour Hoffman, the Oscar-winning actor who overdosed with a syringe in his arm four years ago. Then there are cases such as a Short Hills teen who died a week later, also in February 2014. That beautiful girl, a fresh- man at her dream school, went to a hotel and overdosed. Most people won’t know most of those whose lives are cut short, given estimates of 150 people in the United States dying every day.

While statistics can become abstract, this one can be put in concrete terms. Imagine the city of New Brunswick as a ghost town. Its population of 55,000 is very close to the annual number of estimated deaths from opioids in the United States. “It can impact anyone,” Dr. Cooperman warns. “People have the belief it cannot happen here—not to my community or my family—but it’s everywhere.”

Yet despite the drug’s relentless death march, Dr. Williams sees glimmers of optimism. “I think things are getting better,” she says, adding, “Public awareness has been really helpful and a huge step forward.” Nevertheless, she says, “We need funding. Substance abuse treatment is usually underfunded compared to other aspects of medicine. We can always be doing more of that.” And as more doctors receive training, a turnaround is bound to happen. “Our goal is to learn and raise awareness so that as the next generation of physician,we are well equipped to serve our patients,” says Marabondo. 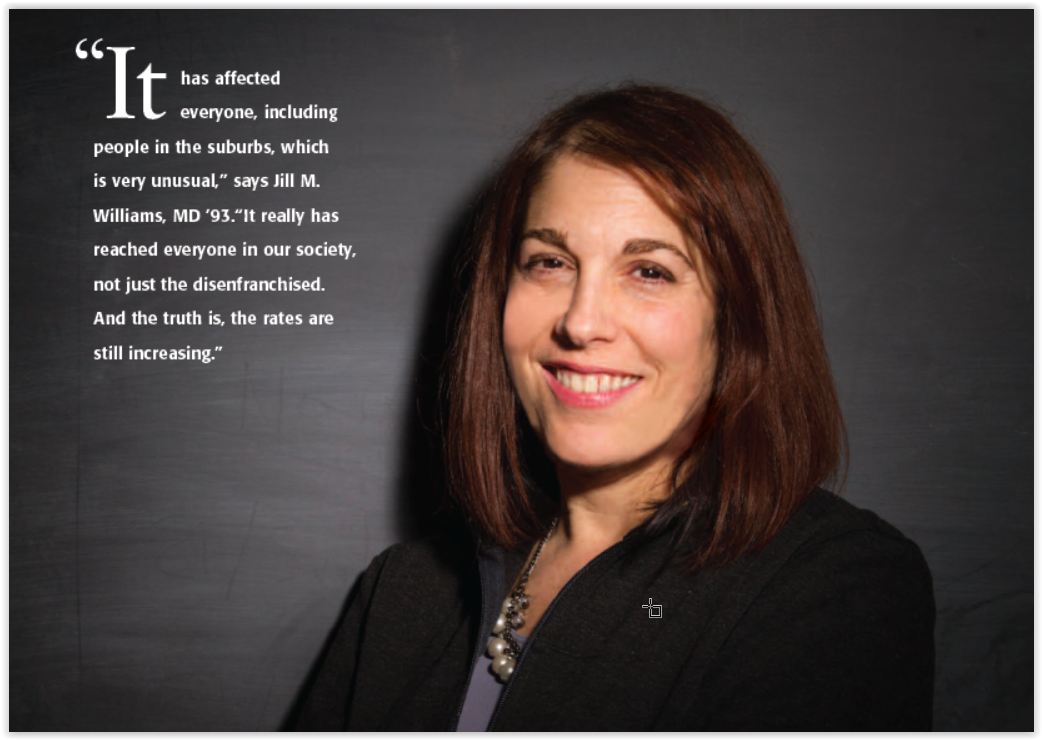