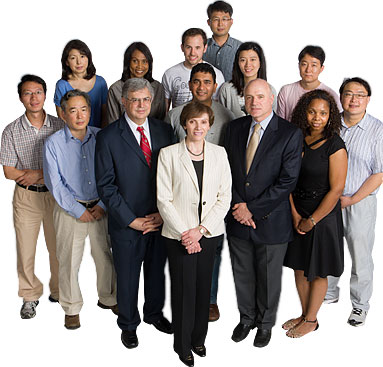 M. Maral Mouradian, M.D., is the William Dow Lovett Professor of Neurology at Rutgers - Robert Wood Johnson Medical School, Founding Director of the RWJMS Institute for Neurological Therapeutics, and Vice Chancellor for Faculty Development at Rutgers Biomedical and Health Sciences. Dr. Mouradian obtained her medical degree with distinction from the American University of Beirut and neurology training at the

University of Cincinnati Medical Center. She then joined the US National Institutes of Health (NIH) where she received postdoctoral training in clinical pharmacological research in Parkinson disease (PD) and other neurodegenerative disorders in the laboratory of Thomas N. Chase of the National Institute of Neurological Disorders and Stroke (NINDS). She received additional training in molecular biology under the tutelage of the Nobel Laureate Marshall Nirenberg at the National Health, Lung and Blood Institute. Prior to joining Rutgers, Dr. Mouradian led the Genetic Pharmacology research program of NINDS, NIH. As an internationally recognized physician-scientist, her career focus has been to elucidate the molecular pathogenesis of Parkinson’s disease (PD) and its treatment complications, and to develop therapies both for disease modification and improved symptom control. Her seminal contributions have provided the rationale for the development of continuous therapeutic modalities for PD. To date, she has authored over 200 scholarly publications, edited two books on Parkinson disease, and holds several patents. Her research is funded by multiple grants from the NIH, the Michael J. Fox Foundation for Parkinson’s Research, the American Parkinson Disease Association, and other foundations.

Dr. Mouradian is an elected member of the Alpha Omega Alpha Honor Medical Society, a Fellow of the American Neurological Association, a Fellow of the American Academy of Neurology, and an alumna of the Hedwig van Ameringen Executive Leadership in Academic Medicine (ELAM). She serves on grant review panels for the NIH and other national and international funding agencies, and is a member of the Scientific Advisory Board of the American Parkinson Disease Association. In addition, she is the Editor-in-Chief of the journal Neurotherapeutics and serves on the editorial boards of several other scientific journals. Among her honors are the Excellence in Research Award from the New Jersey Health Foundation, the Outstanding Medical Scientist Award from the Edward J. Ill Excellence in Medicine Foundation, the Rutgers Board of Trustees Award for Excellence in Research, and the NIH Award of Merit.

Suhayl Dhib-Jalbut, MD is Professor and Chairman of the Departments of Neurology at RUTGERS-Robert Wood Johnson Medical School and New Jersey Medical School. He also directs the RWJ Center for Multiple Sclerosis (MS). Dr. Dhib-Jalbut graduated Alpha-Omega-Alpha from the American University of Beirut in

Lebanon and completed his Neurology training at the University of Cincinnati. He then joined the National Institutes of Health (NIH) in Bethesda, Maryland where he specialized in MS and Neuroimmunology.

Dr. Dhib-Jalbut’s extramurally funded research includes how MS therapies work, biomarkers of treatment response in MS, and neuroprotective gene therapy. To date, he has contributed over 130 manuscripts to the scientific literature. He has served as Associate Editor of the Journal of Neuroimmunology, and is currently Associate Editor of the MS Journal and a member of the Editorial Boards of JICR, Cytokine, and Multiple Sclerosis. He has served on several National and International scientific committees including Chairmanship of the Scientific Committee for the World Congress on MS in 2008. Dr. Dhib-Jalbut served as President of the Americas Committee for Treatment and Research in MS (ACTRIMS) and presided over the largest international MS Congress held in Boston in 2014. Dr. Dhib-Jalbut has been on the Best Doctors in America list since 2009 and has received several awards and recognitions including the Norman H. Edelman clinical science mentoring award at Rutgers, the Medical Excellence Award from the National MS Society, the Outstanding Medical Scientist Award from the Edward J. Ill Excellence in Medicine Foundation, and the Excellence in Research Award from the New Jersey Health Foundation.

Konstantin Balashov, MD, PhD, FAAN, is Professor of Neurology at Rutgers - Robert Wood Johnson Medical School and Rutgers New Jersey Medical School. He sees patients with multiple sclerosis at the Rutgers Multiple Sclerosis Centers in New Brunswick and Newark, NJ, is actively involved in clinical trials and research on multiple sclerosis, and teaches medical students and neurology residents. He is board-certified in both Neurology and Neuroimaging.

Dr. Balashov received his MD and PhD degrees from the Russian State Medical University and Russian Academy of Medical Sciences, Moscow. He graduated from the Neurology Residency Training Program as Chief Resident at the New Jersey Neuroscience Institute in Edison, NJ and completed fellowship training in multiple sclerosis at Harvard Medical School under the mentorship of Dr. Howard Weiner.

Dr Balashov’s research projects have been funded by the National Institutes of Health, National Multiple Sclerosis Society, and other research foundations. He is the author of more than 50 original papers and reviews.

Dr. Eunsung Junn is currently an Associate Professor in the Department of Neurology at Rutgers - Robert Wood Johnson Medical School. Prior to joining Rutgers, he received post-doctoral training at the NIH and earned his Ph.D from Korea Advanced Institute of Science and Technology (KAIST). His laboratory currently focuses on understanding the pathogenetic mechanisms of Parkinson’s disease and spinal cord injury and their treatments, with a particular emphasis on the role of microRNAs. His research has been funded by multiple grants from the NIH, the American Parkinson Disease Association, the New Jersey Commission on Spinal Cord Research, and other foundations.

Dr. Kouichi Ito is currently an Associate Professor in the Department of Neurology at Rutgers-Robert Wood Johnson Medical School. He received training in molecular immunology as a visiting scientist at MIT and earned his PhD in Immunology from The Jikei University School of Medicine in Tokyo, Japan. Prior to assuming his position at Rutgers-RWJMS, he served as a Laboratory Head in the Department of Immunology at Hoffmann-La Roche (Nutley, NJ) and studied the effects of Human Leukocyte Antigen (HLA) on the development of autoimmune diseases including Multiple Sclerosis (MS). He also served as the Acting Chief of the Neurological Disease Section in the Neuroimmunology Branch at NIH/NINDS and studied the mechanism of encephalitogenic T cell development using humanized animal models of MS. His group focuses on understanding the pathological mechanisms of initiation and progression in MS using experimental autoimmune encephalomyelitis (EAE), an animal model of MS. He is currently investigating the link between gut microbiota and development of MS and how neuroinflammation triggers neurodegeneration such as demyelination and axonal loss. His laboratory is also investigating the therapeutic mechanism of FDA-approved disease modifying drugs for MS using specimens derived from MS patients and EAE animal models. His research has been funded by multiple grants from the NIH, Department of Defense, National MS Society, and other foundations.

Yoon-Seong Kim, M.D. Ph.D. earned his medical degree from Kyung-Hee University Medical College in Seoul, Korea, and his Ph.D. in neuroscience from Weill Cornell Graduate School of Medical Sciences in 2003 under the supervision of Prof. Tong H. Joh. He then joined Dr. Flint Beal’s lab in the same institute as a postdoctoral fellow. Dr. Kim went on to join the research faculty at Cornell as an instructor in 2006 and was promoted to assistant professor in 2009. In 2010, he moved to the Burnett School of Biomedical Sciences at the University of Central Florida as an assistant professor of neurodegenerative disorders and became an associate professor with tenure in 2015. He joined the RWJMS Institute for Neurological Therapeutics at Rutgers - Robert Wood Johnson Medical School in 2020. His research has been funded by multiple grants from the NIH and the Michael J. Fox Foundation for Parkinson’s Research. He serves NIH grant review panels and on the editorial board of Scientific Reports.

Dr. Kim’s research focuses mainly on the elucidation of the molecular mechanisms underlying oxidative stress-related nigrostriatal degeneration in Parkinson’s disease (PD) using a range of rodent PD models. He reported for the first time that NADPH oxidase 1 (NOX1) is expressed in dopaminergic neurons and that NOX1-derived ROS is responsible for dopaminergic neuronal degeneration and α-synuclein aggregation, which are pathological hallmarks of PD. Currently, his research is expanding to investigate the molecular mechanisms governing oxidative stress-mediated α-synuclein changes including epigenetic and translational regulation as well as protein aggregation and impact on mitochondrial functions. He has recently introduced the innovative concept of transcriptional mutagenesis (TM) of the SNCA gene and its contribution to PD pathogenesis. This original idea is widely applicable to other neurodegenerative conditions including Dementia with Lewy Bodies (DLB) and Alzheimer’s disease. His research pipeline is highly interdisciplinary and integrates core areas of neurodegenerative diseases.