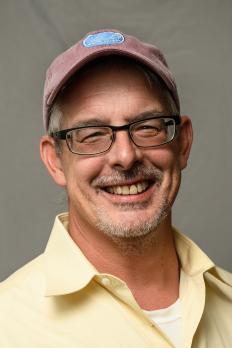 My lab studies dorsal CNS development by taking the unique approach of combining mouse genetics with neuroanatomy. Our goal is to identify the pathways, which control the generation and differentiation of dorsal CNS neurons.

Mouse genetics provide a powerful means of studying vertebrate CNS development. More than 50 spontaneous mouse mutations exist that exhibit neurological phenotypes. Most of these mutations affect a dorsal structure called the cerebellum. which controls motor movement. Perturbations to this structure result in an uncoordinated mouse, which is such an obvious phenotype that many different mutations have been isolated over the years. Most of these mutants have never been examined phenotypically, which is unfortunate because valuable insights have been gained into the cellular signaling required for vertebrate CNS development from the few that have been analyzed. Even ten years ago it was virtually impossible to clone the gene responsible for the mutant phenotype. However, with the advances of mouse molecular genetics it is now much more feasible to clone these genes. This has been accomplished for a handful of mutants and has again led to important insights into vertebrate CNS development. It is our goal to combine these two disciplines and I think our analysis of the dreher (dr) mutation described below illustrates how this approach is advantageous.

There are millions of different kinds of neurons in the vertebrate CNS. One of the central questions to developmental neurobiologists is how this diversity is generated. This is especially compelling considering that the entire brain and spinal cord arises early in development from a homogenous sheet of neuroepithelial cells. It is now believed that signaling centers, which are situated at precise locations along both axes instruct neuroepithelial cells toward a particular lineage through the action of secreted proteins. Varying concentrations of these secreted factors induce the expression of different transcription factors, which are then responsible for initiating a particular developmental program. For example, dorsal CNS development is coordinated by a structure called the roof plate, which is situated on the dorsal midline along the entire length of the neural tube. Bone Morphogenetic Proteins (Bmps), which are secreted factors, are expressed specifically in the roof plate and are believed to coordinate most aspects of dorsal CNS development.

The most beneficial mouse mutation for studying dorsal CNS development would be one that lacked a roof plate. My lab has identified the first mutation in any vertebrate species that affects roof plate formation. It is a spontaneous mouse mutation called dreher (dr). The mouse exhibits various neurological phenotypes and is missing a large portion of the dorsal CNS. Positional cloning by us has identified the gene responsible for the dr phenotype. It is a transcription factor of the Lim homeodomain class called Lmx1a. Insitu hybridizations have determined that Lmx1a is expressed solely in the roof plate. Thus, functional Lmx1a is required in the roof plate for this signaling center to form during development.

Since the dr mutation lacks a roof plate, we are now using this mutation to determine the invivo function of the roof plate during dorsal CNS development. There are two questions that we are asking. First, to what extent is the roof plate required for the generation of dorsal neurons? Second, after these cell fate decisions have occurred, does the roof plate still coordinate dorsal CNS development? We have examined both the dorsal spinal cord and cerebellum and have discovered that the normal complement of neurons is not generated in the mutant and that aspects of neuronal differentiation including axon extension and migration are perturbed in dr. This indicates that non-autonomous signals from the roof plate are required for both the specification and differentiation of dorsal neurons. Future experiments are aimed at identifying the genes that control these processes.

We are also interested in identifying genes downstream of roof plate signaling. By comparison to other developmental systems. it seems likely that these genes would be transcription factors. The cerebellum was chosen for this analysis because it is the simplest dorsal structure being composed primarily of just three cell types. Our analysis has discovered that three different transcription factors are observed in non-overlapping domains in the early cerebellar anlage. Amazingly, these same three transcription factors are observed in the dorsal spinal cord. This suggests that these genes could be common downstream targets of roof plate signaling, representing a "code" for dorsal CNS development. We are now in the process of determining the function of these genes in early cerebellar development.